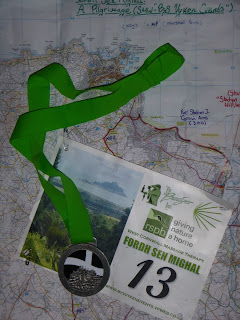 December 10th 2016. The day doesn't so much break as crawl reluctantly from under the cover of night, revealing a sky heavy with mist, droplets losing their battle with gravity and falling gently to earth.

Lelant, nestled at the head of the Hayle Estuary, gateway to St Ives, dozes in the grey dawn as we come, our brash colours clashing with the earthern granite buildings. One by one, in pairs, in groups we file quietly into the Badger Inn; perhaps mirroring the exodus of a Friday night too few hours before.

Warmth, chatter and bustling organisation greet us on entry, smiles and greetings from those in the know, nervous chatter from those who have yet to find out.

This morning will see a first race on an ancient route - a pilgrim's route - leading us South from Carbis bay, across the knurled spine of Penwith and on to the coast, finishing under the watchful eye of St Michael's mount. Fordh Sen Mighal - St Michael's Way - is the latest offering from Bys Vyken events, themselves a recent addition to the trail running scene and already building a reputation for well organised low key events with a great sense of history.

Soon we are ushered out into the damp morning; we line up quietly on the road by the station and with the minimum of fuss we are off. Too fast, keen to be at it, or just hurrying to warm up we swarm off on the road towards the North coast. A sharp, not so short, hill injects an early burn into my legs and I know I'm going too fast but there will be plenty of time to slow down later so I push on. Reaching St Uny Church we leave the road, dropping down through the golf course before turning to traverse through hairy dunes from the Mouth of the estuary and on to Hawk's point. Reaching Carbis Bay we turn inland as we join the St Michael's way footpath.

Its a long slog up through the town across a road and ever upwards until, breaking out onto open moorland, we are met by the implacable obelisk of Knill's monument - built by the man himself, a one time Mayor of St Ives among other things - before skipping off down narrow muddy paths in the persistent gloom. Shortly a stretch of road allows the pace to quicken before  diving through the hedge via the first of many stiles we begin a gradual climb towards Trencrom hill - the high point of the route.

Arriving at the half way point at the crest of the hill we are greeted by marshals and signage telling us to "suck it up". The advice is that the descent will be slippery - classic understatement. Granite slabs in wet and muddy conditions make it hard to run all out - a couple of tense moments later I'm at the bottom thankfully without injury.

I know the terrain will be easier in the last miles but a few ups and downs keep me breathing hard, the rain is falling steadily now and the effort is the only thing holding the chills at bay. I'd shunned my waterproof early on, preferring to brave the elements than boil in my bag of a coat.

In the last miles we make some busy road crossings - made safe by the ever present, super efficient marshals - before entering the RSPB managed Marazion Marsh. Finally we emerge, bedraggled and windswept onto the coast line, the Mount rearing up off shore, still visible though the clag. A cruel little detour up into the village and back along the breakwater and its homeward bound - the finish line at the door to the Station House pub.

Wide smiles and warm greetings all around, I'm handed one of the most beautiful medals I've ever received along with sustenance in the shape of home made mince pies, crisps and biscuits.

No doubt this race will be a staple in the Cornish trail running calendar in years to come.

I'd chosen to run back to the start via a different route, after wringing out my shirt and popping on all my layers I set off, far slower now. By the time I got back I was regretting my decision since it rained most of the way and my legs were cramping from the hard efforts earlier in the day. Still the circular route made for an adventorous twenty mile loop - it just pays not to race the first eleven!